Tuna Salad with Avacado and Grapefruit 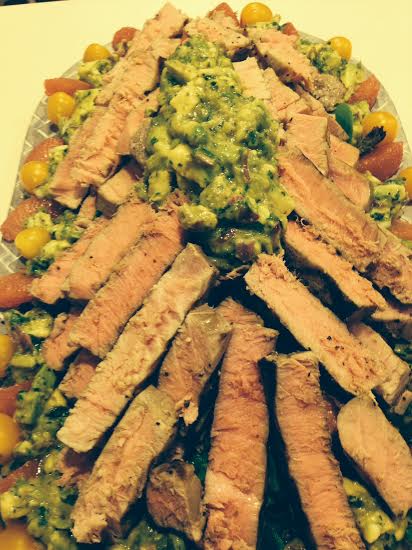 This is a combination of Giada and Ina Gartens recipes. I think it is the best of all three recipes.

Six tuna steaks about a half a pound a piece

Salt and pepper for sprinkling over the fish

8 tablespoons olive oil for the dressing

Zest of one large lime or two small

One box of arugula

2 cups seeded and peeled grapefruit sections with their juice

One box of cherry tomatoes

Heat the grill to high

Brush the tuna with the olive oil, salt and pepper

Grill on each side about two minutes. You want the tuna rare.

Toss the diced avocado in the dressing

Arrange the lettuce , arugula, cucumber, red onion, parsley, cilantro and fennel. Toss with half the dressing. Slice the tuna and place it on top. And the rest of the dressing including the avocados.

Sprinkle with the caramelized onions.

Decorate with the grapefruit, scallions and cherry tomatoes.

Drizzle the grapefruit juice on top.

This is so pretty and great for a main course.

View all posts by cmangoff